Reducing Nitrogen dioxide and particulate emissions from road transport is one of the most effective ways to improve air quality in urban areas. Motorists who leave their engines running when parked cause unnecessary, harmful air pollution.

The Road Traffic Act 1988 and the Road Vehicles (Construction and Use) Regulations 1986 deal with how vehicles can be used on a road.

Under this national legislation, you must not leave a parked vehicle unattended with the engine running or leave a vehicle engine running unnecessarily while that vehicle is stationary on a public road.

The Act and Regulations are enforced by the police. However, under the Road Traffic (Vehicle Emissions) (Fixed Penalty) (England) Regulations 2002, local authorities may enforce the “stationary idling offence” (which is a contravention of regulation 98 Road Vehicles (Construction and Use) Regulations 1986 as it relates to the prevention of exhaust emissions).

This means that in a designated air quality management area (Newcastle's city centre is one), local authority officers have a discretionary power to request a driver to switch of the engine of a vehicle which is unnecessarily left running, and would be in breach of the above regulations.

It is an offence to fail to comply with the request and a £20 penalty notice may be issued by the officer.

Drivers will not be penalised in cases where common sense (and/or exemptions listed in the Construction and Use Regulations) dictates that the engine needs to be running. Examples are: 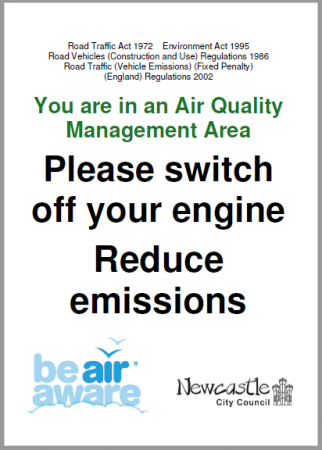