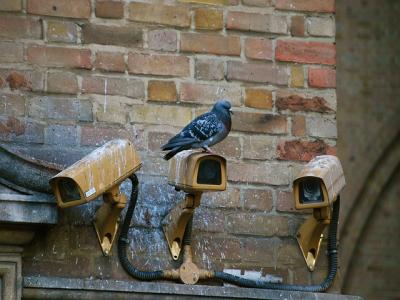 Pest control are unable to help if a bird is stuck under a solar panel as they need to be removed. Residents should contact their supplier in these cases.

If you are a YHN Tenant please contact your housing officer regarding bird control.

Even though Newcastle is a busy place, we still have a wide variety of wildlife in our city. Sometimes people think of some of these creatures as pests or nuisances, but they are worth looking after.

The River Tyne is home to an important breeding population of Kittiwakes.

These are not pests and during the nesting season our City Centre teams regularly clean the pavements in this area.

There are around 600 pairs along the Newcastle-Gateshead Quayside. The Kittiwakes that breed along the Tyne nest on man-made structures such as the Tyne Bridge and the Baltic Centre for Contemporary Art in Gateshead. This colony is notable because it is the furthest inland colony of kittiwakes in the world.

Birds, their nests and eggs are protected by law, and it is illegal to destroy or interfere with them except under licence from the Government. Even where their destruction is licensed, non-lethal methods must be considered first, and many killing methods are outlawed. Lethal methods should always be left to pest control professionals.

Feral pigeons, also called city doves, city pigeons, or street pigeons, are descended from domestic pigeons that have returned to the wild. The domestic pigeon was originally bred from the wild rock dove, which naturally inhabits sea-cliffs and mountains. Rock, domestic, and feral pigeons are all the same species and will readily interbreed.  Pigeons in towns and cities find the ledges of buildings to be a substitute for sea cliffs.

Many people like urban wildlife and enjoy feeding birds. However, sometimes feral pigeons can pose problems, particularly when they occur in large numbers. Bird droppings are unsightly and the acid corrodes stonework and metal, damaging buildings. Droppings on pavements can be slippery when wet, and pose a danger to pedestrians. Droppings, nest material and dead birds can block guttering and drains and cause water damage to buildings. In addition dead pigeons in uncovered water tanks can contaminate the water supply.

Many problems arise when neighbours overfeed birds, which can attract lots of feral pigeons to one location. There are no laws the Council can effectively use to stop people feeding birds, especially if the birds are being fed on someone's own land such as their garden. If a large amount of rotting food accumulates, or the feeding is attracting rats or mice, the Council may be able to help. You may be asked to complete a diary form showing the extent of the problem and how it affects you (see our pages on nuisance).

If the feeding is simply causing nuisance from droppings etc., it is a private matter between neighbours and the Council cannot assist. Try approaching your neighbour to explain the problems that are being caused, and ask them to reduce the amount of food they provide in order to reduce the number of birds that are attracted. A gradual reduction in food will not cause the birds to starve. They will seek food elsewhere and reduce their breeding naturally. In this way populations can be humanely reduced.

If the bird feeding is taking place on public land, and is excessive, the Council may contact the person involved and discourage them.

Excessive feeding can actually harm pigeons as it can cause overcrowding at feeding sites, and promote the spread of disease among birds. In addition, many pigeons are killed each year by people trying to reduce their numbers. People should try to ensure that the number of birds they attract does not cause a problem which might cause a neighbour to hire a pest control company to have them killed.

Are they a health hazard?

Many people express concern that pigeons pose a health hazard to humans, but this fear is generally unfounded and exaggerated. Pigeons, like other birds, can suffer from some diseases that can also affect humans. However, with the exception of people whose jobs or hobbies bring them into close contact with large numbers of birds or their droppings, the actual risk of disease transmission from casual contact is negligible.

Can the Council stop my neighbour from feeding pigeons?

No. There is no law available to stop a person from feeding wild birds. We may be able to take action in serious cases, where rotting food is accumulating, or where the feeding can be shown to be the cause of an infestation of rats or mice. If your neighbour is a tenant, such behaviour, especially on communal grounds, may be covered by tenancy rules. You should contact you housing officer or landlord.