A power of entry is a statutory right for a person (for example, local authority trading standards or environmental health officers) to legally enter defined premises, such as businesses, vehicles or land, for specific purposes.

The purposes for which a power of entry might be exercised include undertaking an inspection, dealing with an emergency or searching for evidence during an investigation. Often, a power of entry is accompanied by what are known as ‘associated powers’, which set out what the officer can do once they have entered the premises. This might include conducting a search, seizing articles or collecting samples. 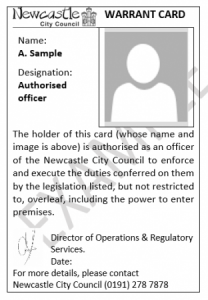 In addition to a staff identification card, our authorised officers carry warrant cards, which identify them and their delegated legislation. It is not possible to list all the relevant legislation, but the Acts (primary legislation) giving power to enter private property and/or seize items will be listed.

Generally legislation giving a power of entry entitles an authorised officer, on production (if so required or requested by the occupier) of his or her authority, to enter premises at any reasonable time.

Code B to PACE applies where an officer who has powers to carry out an inspection has grounds for suspecting an offence has been committed. The inspection then becomes a search for evidence and Code B deals with the powers to search the premises and seize and retain property found on them either under the statutory power and with the consent of the occupier, or under a warrant issued by a magistrate or judge.

The officer will normally issue a notice of powers and rights. This should include:

Persons other than police officers who are charged with the duty of investigating offences or charging offenders must have regard to Code B. Code B states that it does not apply if the exercise of a power is not dependent on the existence of grounds for suspecting that an offence may have been committed and the person exercising the power has no reasonable grounds for such suspicion.