Thousands of supporters will be signposted to mental health support as Newcastle United Foundation’s #BeAGameChanger campaign takes centre stage at one of Newcastle’s most anticipated fixtures of the season. 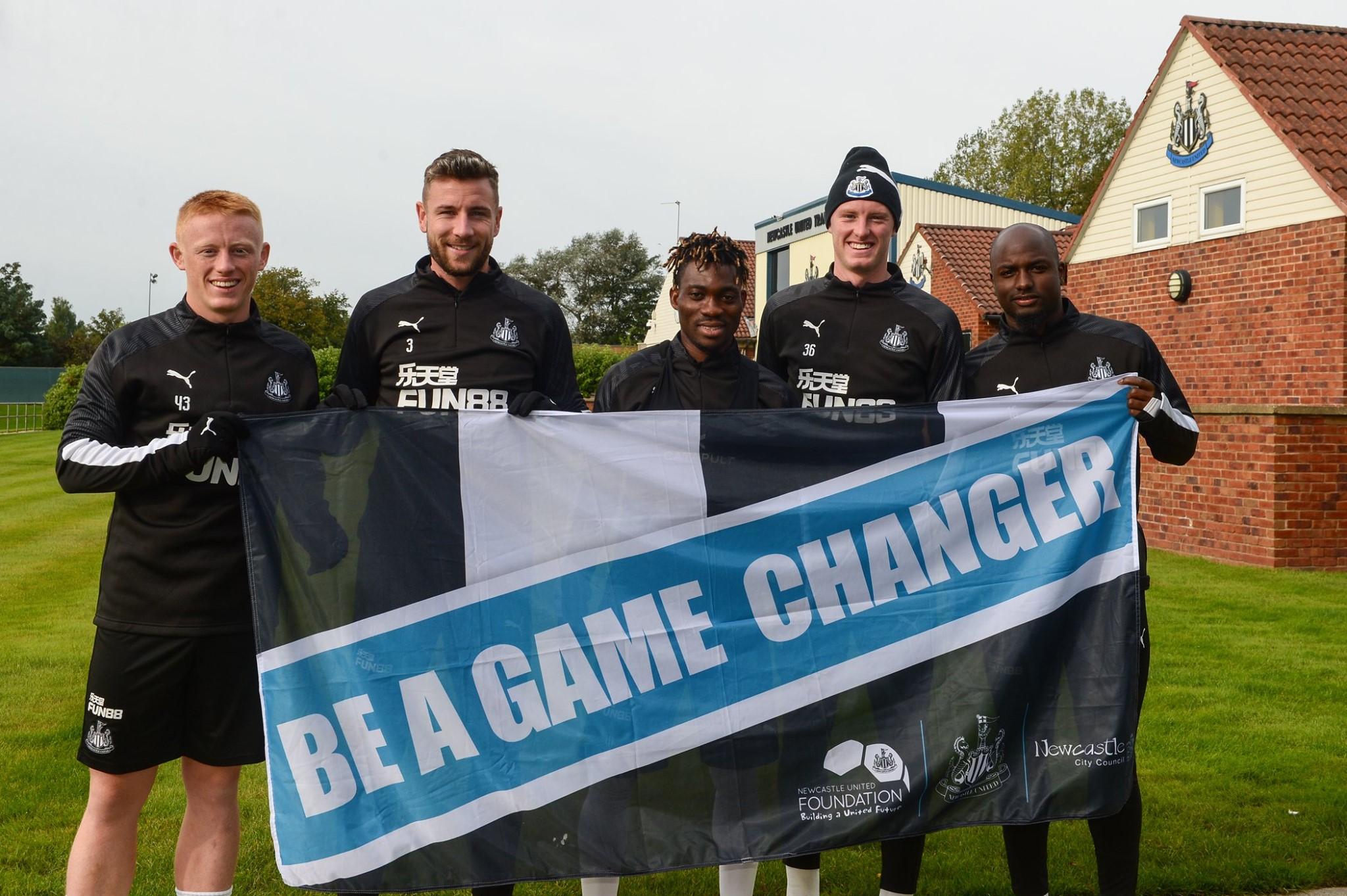 Players from Newcastle United supporting the Be A Game Changer campaign

Up to 50,000 people will be made aware of World Mental Health Day on October 10 at St. James’ Park on Sunday afternoon as Newcastle United host Manchester United.

Ahead of the match, LED screens will display #BeAGameChanger campaign information, as well as hundreds of business cards offering useful information for anyone who may be struggling.

In February 2019, #BeAGameChanger launched to encourage Newcastle United supporters to talk about their mental health and recognise when they or their loved ones are in crisis.

Newcastle United Foundation Health and Wellbeing Manager Ashley Lowe said: “We know that the North East has one of the highest rates of suicide and that suicide is the most common cause of death for men aged 20 to 49.

“Given that we have a community united by a love of football, we were confident that the power of the Newcastle United badge could be a catalyst for much-needed conversations amongst men, and a great way to break down stigma and feelings of shame or isolation.”

Figures published in September 2019 revealed the North East region has the highest male suicide rate in the country and that of all recorded suicides, 75 per cent of those taking their own lives are men.

Ashley added: “It’s a well-known fact that one in four people experience a mental health problem at some point in their lives. But to really bring the message home, our campaign equated that to almost 13,000 fans at every Newcastle United home game – or an entire crowd in the Milburn stand.

“It’s a very powerful message when fans who regularly attend matches can visualise it in this way.”

The #BeAGameChanger Facebook community is a growing source of comfort, advice and practical information for those experiencing mental health issues or friends and relatives supporting someone else.

In a survey conducted with more than the 860 members of the community, 70 per cent stated the #BeAGameChanger campaign has changed the way they think about mental health and 40 per cent said they had since opened up to someone about their own mental health.

One supporter who has found hope and support through the campaign is Les Peacock. He said: “I’ve lived through periods of quite severe depression, but I felt too embarrassed to talk about it openly.

“However, since taking part in the campaign, I’ve found more support and have been able to help others too. The #BeAGameChanger campaign has made a huge difference and changed my life for the better.”

The #BeAGameChanger campaign, which in funded by Newcastle City Council and the Premier League PFA Community Fund, delivers hours of community sessions each week to support mental wellbeing.

Of those projects is Walking Football, which not only provides an opportunity for gentle exercise with a coach, but also a pressure-free environment to socialise with like-minded participants. Those joining the sessions are also signposted to free over-40s NHS health checks, specific mental health sessions with MAN v FAT and 12th Man programmes.