The OVO Energy Tour of Britain, the UK’s biggest professional cycle race, will return to the North East of England this September as the North of Tyne hosts the third stage of the race on Monday 9 September. 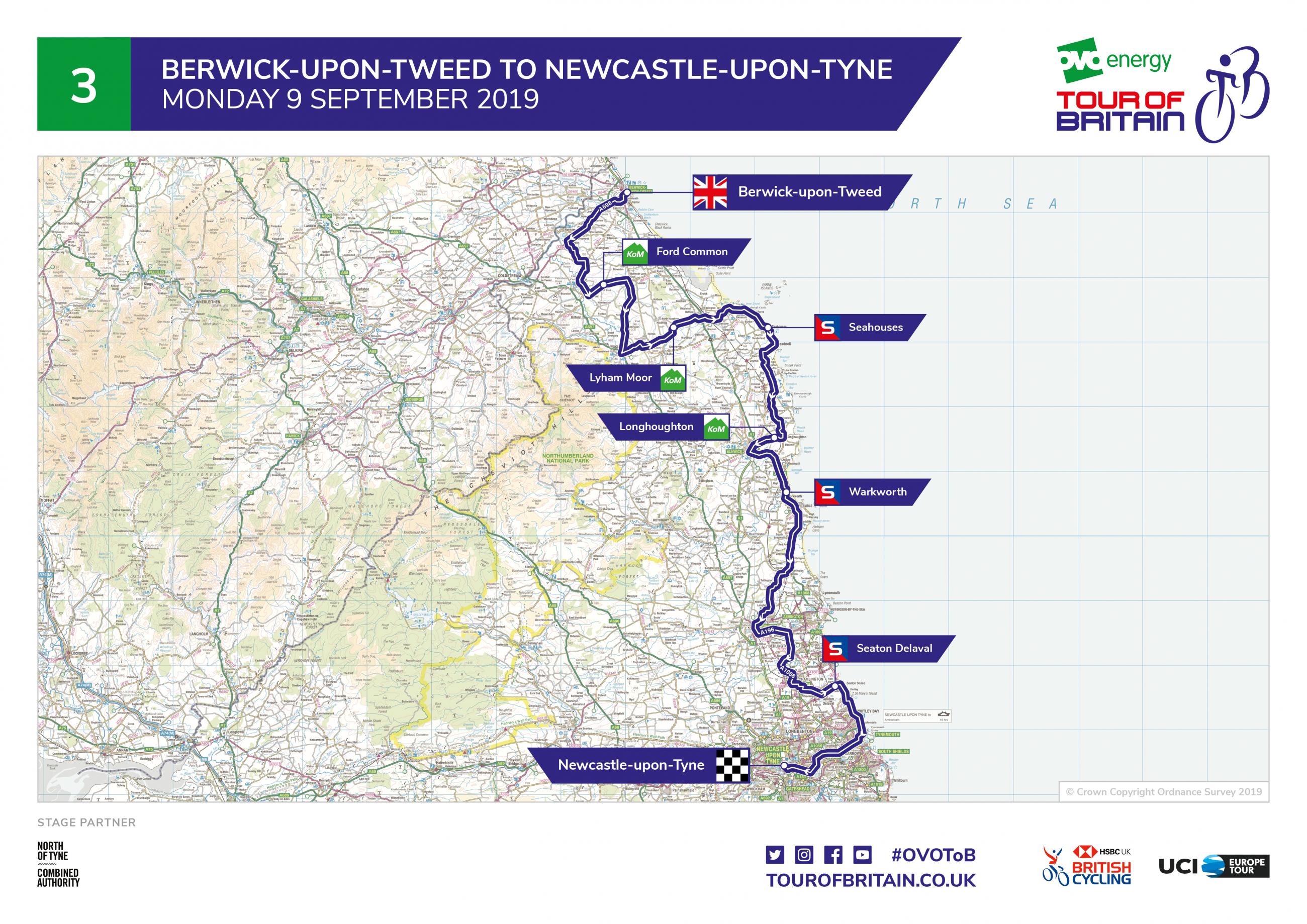 Stage of Three of the OVO Energy Tour of Britain

Stage Three will see the world’s top riders and teams contesting a 182-kilometre (114-mile) route from Berwick-upon-Tweed, heading along the North Tyneside coast and into Wallsend, before continuing to Newcastle Upon Tyne city centre, with a spectacular finish on Grey Street.

It will be the first ever OVO Energy Tour of Britain stage to link all of the areas of the North of Tyne Combined Authority, with the route taking in Northumberland, North Tyneside and Newcastle Upon Tyne.

North of Tyne Mayor Jamie Driscoll said: “This is great news – I’m really looking forward to the Tour of Britain coming to the North of Tyne.

“The Northumberland coastline is the perfect setting for a long distance cycle race, and as the riders make their way into Wallsend, the tension will build and we’ll be able to support the riders. And the finish in Grey Street will be really exciting!

“We’ll be working with schools, sports clubs, and local businesses to make sure everyone benefits from hosting this here, in the North of Tyne. There’s the boost to our tourist businesses, of course, and it’s a great opportunity to enthuse people about cycling and the health and environmental benefits it brings.”

Northumberland has twice before hosted stages of the race, in 2015 and 2017, while it will be the first visit for the OVO Energy Tour of Britain to Newcastle in a decade, with the race having last visited the city in 2009.

The stage will start from the centre of Berwick-upon-Tweed, crossing the Grade I listed Berwick Bridge as the race heads away along the Tweed Valley and onto Ford and Wooler.  The route will race along the Northumberland Coast, including past Bamburgh and Warkworth castles, showcasing the Area of Outstanding Natural Beauty through the worldwide television coverage.

Peter Jackson, Leader of Northumberland County Council added: “We’re incredibly proud to be welcoming back the Tour of Britain, and what better way to showcase all of our iconic landmarks and amazing landscapes to thousands of spectators and cycling enthusiasts expected to line the streets.

“Not only will this allow us demonstrate our castles, coastline and countryside and the growing attraction of cycling in our county to an audience of millions, but we are expecting enthusiastic local support right through Northumberland for this nationally significant event.”

Following the success of previous Northumberland stages that witnessed large crowds for the race across the county, Alnwick, Morpeth, Bedlington and Cramlington will feature before the route heads into North Tyneside through Whitley Bay, Tynemouth, North Shields and Wallsend.

Elected Mayor of North Tyneside, Norma Redfearn CBE, said: “I am delighted that this prestigious race will be coming through our area – this is a wonderful way to support our own efforts to get more families involved in cycling, and I look forward to welcoming all the riders and spectators to our fantastic borough when the race passes through.”

The final kilometres will see the race heading alongside the banks of the River Tyne on the Quayside, before the final turn on to Dean Street and Grey Street for a spectacular city centre finish.

Cllr Kim McGuinness, Newcastle City Council cabinet member for culture, sport and public health, said: “The Tour of Britain is a major event in the British summer sporting calendar and it is a real pleasure for us to host the finish of the North East stage in Newcastle city centre.

“We love cycling events in this city, it’s a sport that has a huge following and I can’t wait to see the city packed with fans welcoming these elite riders as they head towards the finish.”

Commenting on the announcement, OVO Energy Tour of Britain Race Director Mick Bennett said “In recent editions we have had two great visits to Northumberland, so it is exciting to be working with the North of Tyne Combined Authority to deliver an even bigger stage this September with what will be a thrilling finish in Newcastle city centre.

“I have fond memories of the Grey Street finish in Newcastle from the Kellogg’s Tour so know what a memorable finale it will make for a great day of racing in the North East.”

Three intermediate Eisberg Sprints, supported by the UK’s number one alcohol-free wine brand, will also feature on the route at Seahouses, Warkworth and Seaton Delaval.

Sports fans in the North East will have an additional bonus as Stage Four of the OVO Energy Tour of Britain begins the following day from Gateshead’s South Shore Road on Tuesday 10 September.

The 2019 OVO Energy Tour of Britain begins in Glasgow on Saturday 7 September, finishing eight days later in Manchester city centre on Saturday 14 September.  ITV4 will once again screen live free-to-air coverage of each stage, along with a nightly highlights programme of the best of the action.

The OVO Energy Tour of Britain is British Cycling’s premier road cycling event, giving cycling fans the opportunity to see the world’s best teams and riders competing on their doorstep and helping to build a great cycling nation.