School Streets to launch in Newcastle

A scheme to improve road safety and reduce air pollution outside schools will be launched in Newcastle in the coming months. 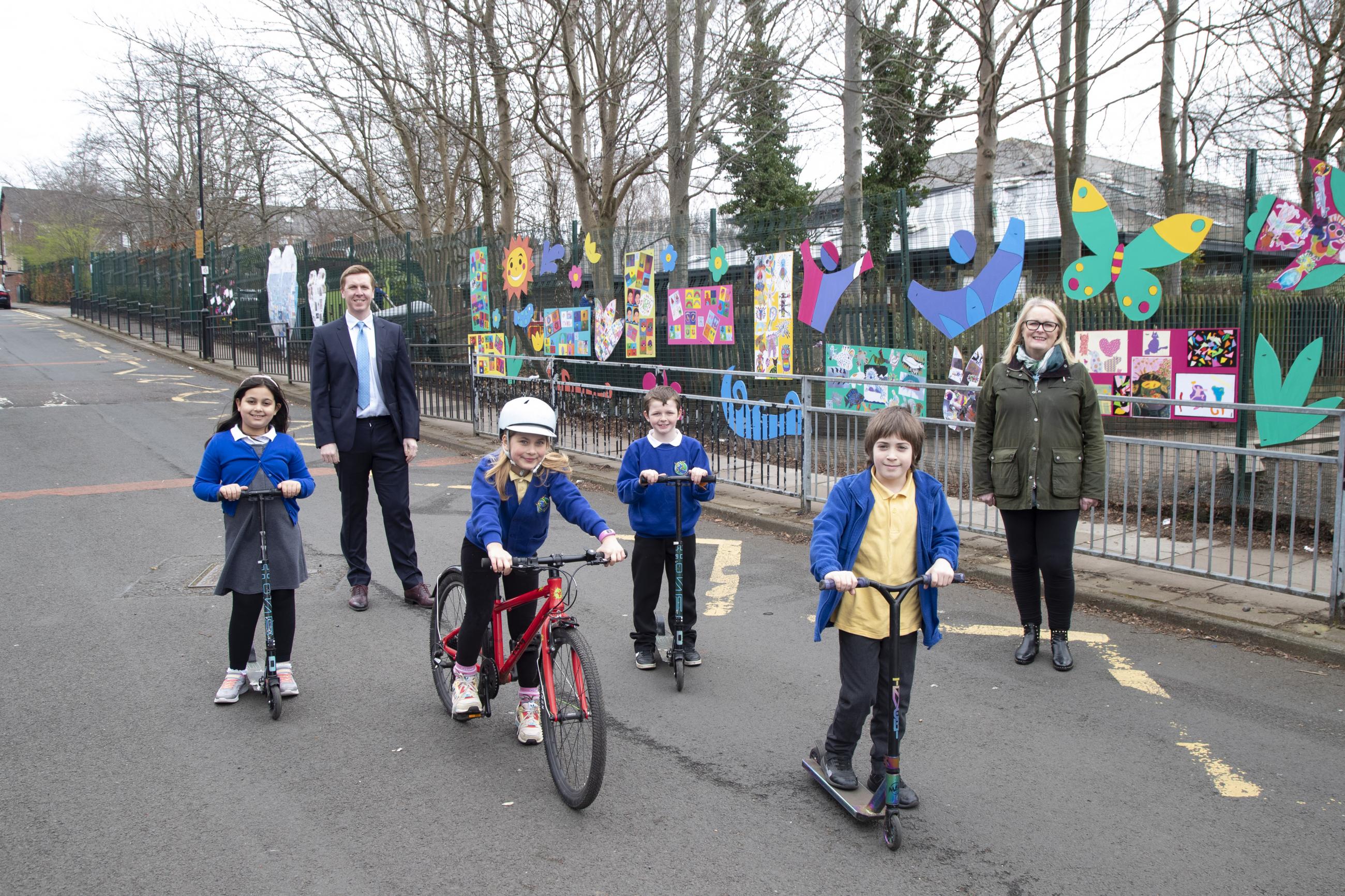 School Streets schemes will be trialled at up to 11 primary schools across the city, with the first phase getting under way during the summer term.
Under the scheme, streets outside the school gates will be closed to traffic during the morning drop off and afternoon pick up times in order to create a safer and healthier environment for pupils and their families.
As well as enabling children to be more active by walking, scooting or cycling to school, the schemes are also expected to benefit neighbouring residents by reducing levels of parking and congestion.
Hotspur Primary School, in Heaton, will be one of the first schools to take part. Headteacher Kevin McVittie said: “The roads around Hotspur Primary School can become very congested at the beginning and end of the day so we really welcome the introduction of the School Streets scheme as it means it will be much safer for our children and much better for local residents.
“The scheme also builds on the messages about healthy living that we give to children in school by further encouraging walking, cycling or scooting to school.”
Ben Wassall, headteacher at Chillingham Road Primary School, also welcomed the opportunity to take part in the School Streets trial, saying: “This is a huge step in the right direction and will reassure our many families and children who walk, bike, scoot or skate their way to school.
“Moreover, this will improve the air quality for all of us at Chillingham Road and finally banish pavement parking and idling from outside our school.”
Barbara Brown, headteacher at Sacred Heart Primary School, in Fenham, added: “We are really looking forward to supporting this scheme as the safety of our pupils is our top priority.
“There have been ongoing issues about parking outside of school for many years. Anything that might reduce the traffic and improve safety is welcome by us, not to mention the environmental benefits which will have a positive impact on all of our families.”
Newcastle City Council is working with the schools and with Northumbria Police to implement the trial. The police are currently responsible for relevant traffic enforcement, but recent plans set out by the government could see this responsibility shift to local councils from later this year.
Cllr Arlene Ainsley, cabinet member for transport and air quality at Newcastle City Council, said: “School Streets schemes have been successfully used in other parts of the country to make the areas outside of the school gates safer and healthier for both schools and the wider community.
“There has already been a huge amount of interest and support for having School Streets operating in Newcastle so we’re very pleased to be able to launch our first trial schemes.
“We’ve consistently wanted to launch School Streets here but haven’t been given the same powers as places like London, so need to rely on support from the police. With government announcing its intention to give us the powers we need, now is the right time to trial these measures, with the support of the police.
“Having the road outside a school closed to vehicles for two short periods of time at the start and end of the school day has the potential to make a big difference to the health and wellbeing of people, encouraging more sustainable and active ways of getting around.”
Sergeant Jane Munro, of Northumbria Police’s Road Safety Team, said: “We welcome the introduction of this trial as we work with partners to find innovative ways to reduce the number of serious collisions and keep pedestrians safe. Unfortunately, despite our warnings, motorists continue to drive irresponsibly near many of our region’s schools and so it would be wrong if we did not explore these kinds of measures.
“We receive a significant number of calls about motorists putting the lives of young people at risk at school opening and closing time so we hope this new initiative reassures people that those concerns are being taken seriously.”
The schools in the first phases of the trial include Broadwood, Farne, Lemington Riverside, Ravenswood, Chillingham Road, Hotspur, Grange First, Kingston Park, Dame Allan’s, Sacred Heart and Westgate Hill primary schools. Further schools in the west of Newcastle outside the A1 are also under consideration for this first phase but rely on further discussions with headteachers.
With enforcement powers expected to transfer to local authorities, the city council is keen to expand the trial to other areas of the city and to schools where people have previously raised concerns about traffic levels and road safety.
In advance of the schemes starting, a joint letter from the council, the police and the school will be sent to parents at each school to let them know about the changes. Police officers will also be visiting each school at the start of the trial to help ensure people are aware of and follow the restrictions.
While the School Streets scheme is in operation, vehicles will not be permitted to travel along the designated street between the hours of 8am and 9.30am or between 2.30pm and 4pm. Access will be permitted for residents and blue badge holders.
The School Streets scheme is one of a number of ways in which the city council is seeking to create more family friendly neighbourhoods by reducing traffic in residential streets and improving networks for walking, cycling and public transport.
If people wish to raise any issues about areas they think have high speeds or levels of traffic on residential streets or around schools, they are asked to contact the council by emailing transport@newcastle.gov.uk.