A series of road safety improvements, including plans to extend a cycleway, in Heaton have been agreed by Newcastle City Council. 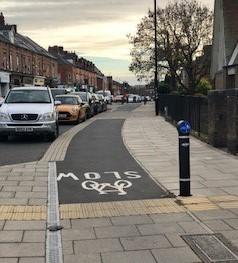 The decision will see the protected cycle route on Heaton Road extended from where it currently ends at Meldon Terrace, initially along to Cartington Terrace and eventually all the way along to the Corner House junction.
There will also be a series of other changes made along Heaton Road to improve safety, including: a new 20mph speed limit between the Coast Road and Meldon Terrace; raised and shorter crossings at junctions with side streets; changes to bus stop locations and on-street parking to help with traffic flow and visibility and a new crossing facility at Simonside Terrace and Burlington Gardens.
The extended cycle route together with the additional measures will provide better links to nearby schools, enabling more children to cycle safely and reducing the number of cars being used on the school run.
The route will also be a key route for people traveling for work, leisure, shopping and other journeys.
Funding of £735,000 has been agreed for the first phase of works, which include the extension of the cycleway along to Cartington Terrace, with changes to that junction included.
Further funding will need to be secured for the second phase of the scheme, which will see the protected cycle route extended further along to the Corner House junction.
Cllr Ged Bell, cabinet member for development, transport and neighbourhoods at Newcastle City Council, said: “We’re making these changes to ensure that there are good quality and safe routes for people in Heaton to walk and cycle, including children and families travelling to and from school.
“It will still be possible for two-way traffic to use Heaton Road and for cars to park or access private driveways but these improvements are also aimed at reducing reliance on cars by making alternative travel options available to more people.
“We all need to think about the number and type of car journeys that we make and, where possible, to switch to active and sustainable modes of travel to help reduce air pollution and carbon emissions.
“We want to make it easier for more people to make that switch by ensuring there are good alternatives and safe routes available to them, such as this extended cycleway in Heaton.”
Work on the first phase of the scheme will start next year.