A topless rogue scrap man has been fined after being identified by his distinctive chest tattoo. 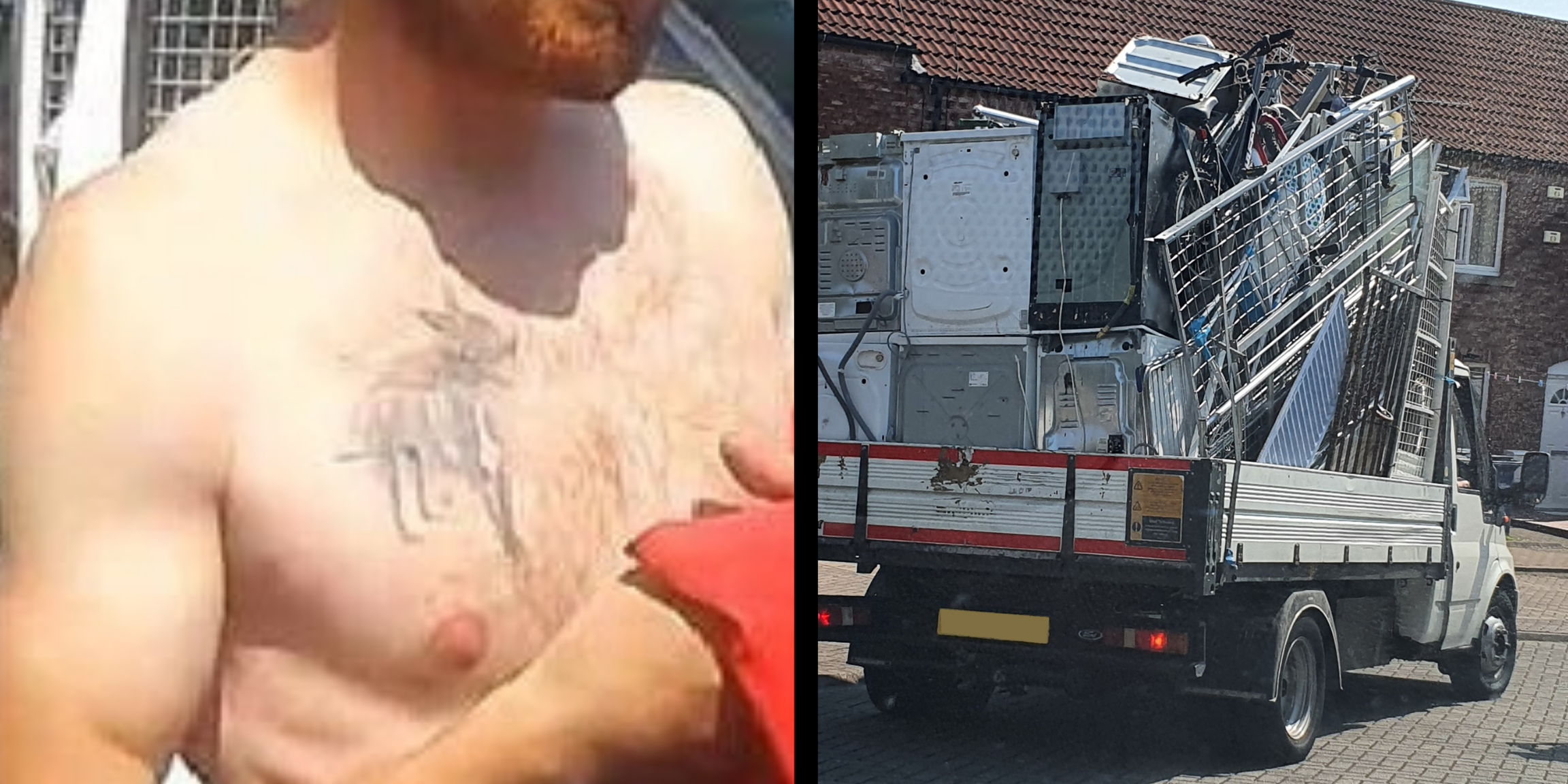 Lewis Temple’s canine body art made the 25-year-old easy to identify after he gave false details to enforcement officers who pulled him over in Newcastle’s West End.

And now he is one of four men that have collectively been ordered by magistrates to pay more than £1,500 for their envirocrimes.

Roy Harris, Newcastle City Council’s environmental protection manager, said: “If you transport waste as part of a trade or business then you must be registered.

“And if you are a household or business then you must take all reasonable measures to ensure that your rubbish – including scrap metal – is only handed over to legitimate, registered waste carriers.

“Do not leave waste or scrap metal out for anyone to take away as you won’t know who takes it, whether they're legally allowed to transport it, or what they'll do with it – which could include blighting your community by fly-tipping.”

On June 24, 2020 council enforcement officers were driving down Westgate Road, in the city’s West End, when they saw a van overladen with scrap metal.

Pulling it over on Quarry Bank Court, the officers found two men in the vehicle.

Passenger Liam Blackburn, 26, of Churchside Gardens in Houghton Le Spring was asked for his waste carrier’s licence, but told officers to speak to the driver, who showed officers a photograph on his mobile phone of what he claimed was his waste carrier’s card, with the name “Glenn”, and the pair were allowed to leave.

Subsequent checks of the Environment Agency’s on-line public register of authorised waste carriers showed there to be no record of the name, address or number on the card shown.

Police confirmed the van’s registered keeper was Lewis Temple, 25, of Chilton Avenue in Fence Houses, and a comparison of body camera images of the driver - who had been bare chested, with a large, distinctive dog tattoo - with photos posted on Temple’s publicly accessible Facebook profile, quickly identified him.

Further searches of the EA’s register showed neither Blackburn nor Temple were authorised waste carriers.

Neither Blackburn nor Temple attended court however Temple pleaded guilty by post to transporting waste without being registered and to providing false or misleading information to an officer. He offered no mitigation.

Karl Gray, 32, of Kent Avenue in Wallsend, and Josh Attrill, 24, of Coniston Road, also in Wallsend, were pulled over by officers at Ward Brothers scrap yard in Ouseburn, having seen their vehicle travelling west along Walker Road.

Gray told council officers that he had “everything in place” to legitimately collect scrap but did not have with him any licences or registrations.

The Environment Agency subsequently confirmed he did not hold a registration at the time he was stopped, however he had applied for one the next day.

Neither Gray nor Attrill attended court, and neither was legally represented, however Gray pleaded guilty by post to transporting waste without being registered.

In mitigation Gray claimed he believed he had made a licence application online, but that he had had some internet issues, and he had not appreciated he was not, in fact, registered.