New measures to reduce traffic cutting through local streets in Heaton were installed on Monday (24 October). 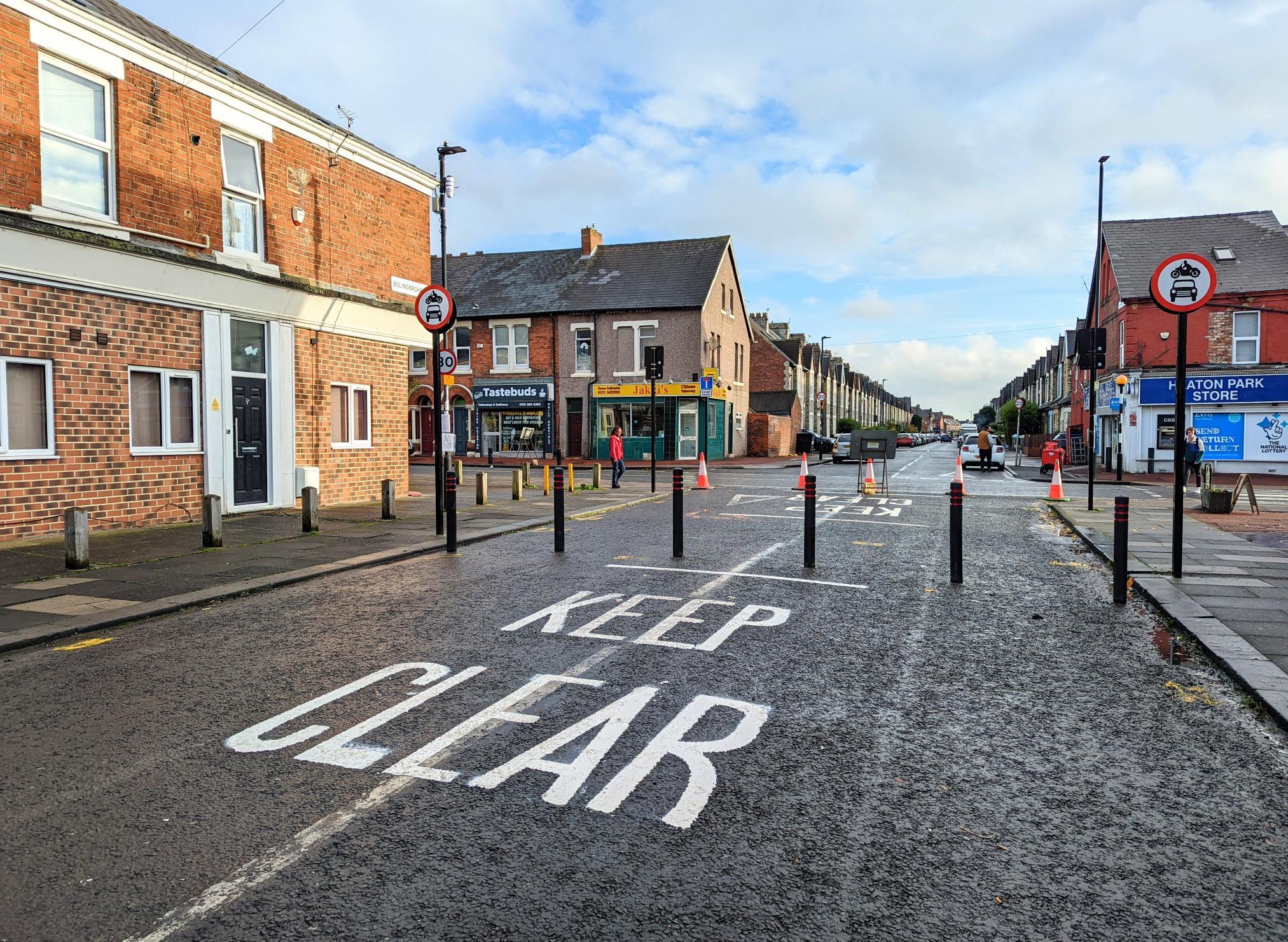 Heaton is the second area in the city to see traffic restricted from cutting through local streets, to create safer, cleaner and greener neighbourhoods. This follows on from a similar scheme which was implemented in Fenham in March.

Using an Experimental Traffic Regulation Order (ETRO), Newcastle City Council is trialling the closure of a number of streets to motor vehicles that will help to make them safer and easier for people to walk, wheel, and cycle on

The measures include closures to motor vehicles on  Bolingbroke Street, Cardigan Terrace, Heaton Park View and Falmouth Road.  Double yellow lines on Stannington Avenue to prevent inconsiderate parking will be introduced, as well as changes to Stratford Road to improve safety by changing priority at this junction, with Stratford Road traffic giving way to Mowbray Street.

The trial measures also link up with the School Street scheme at Hotspur Primary School, as well as the cycle lane on Heaton Road, providing good quality and safe walking and wheeling routes in the local area.

Cllr Jane Byrne, cabinet member for a connected, clean city said: “The changes in Heaton will create safer, cleaner, greener and more people-friendly neighbourhoods. The scheme we are implementing is based on feedback from the public and tackles issues people raised.

“We’re encouraging as many people as possible to take part in the public consultation, so we can make any further changes if needed, to ensure we have the very best scheme based on what people living in the area want.

“With less traffic cutting through local streets, neighbourhoods become much safer and better for the people living there. It also encourages people to walk and cycle on local journeys, which has a big impact on people’s health and wellbeing, improves air quality, as well as greatly improving safety for children getting around their local area, which is why we’ll be rolling this programme out to further areas of the city.”

Under the ETRO process, the changes can remain in place for up to 18 months, with public consultation running until 23 April 2023. Feedback from the consultation will be reviewed alongside data collected, to determine whether the scheme should be made permanent.

To complement the trial, the council propose to make further changes in the area, including an improved pedestrian crossing on Heaton Park Road and access improvements for emergency vehicles and refuse collections to back lanes through new sections of double yellow lines. These are permanent measures, which are subject to further statutory engagement, which will follow on in early 2023.

Following feedback on the earlier proposals, the council will introduce an additional closure on South View West to stop through traffic as this was a concern raised by residents. A stand-alone Experimental Traffic Regulation Order is being developed for this closure.

The council is also further considering a closure to through traffic on Ouseburn Road, which again was raised by residents, and will update on this at a later date. Any measure introduced there would be subject to a separate legal order.

Leaflets setting out the changes and information on the public consultation have been sent to residents and businesses living in the area.

More information and the link to have your say is available at https://safeheatontrials.commonplace.is/