Illegal e-cigarettes worth more than £190,000 have been seized in Newcastle. 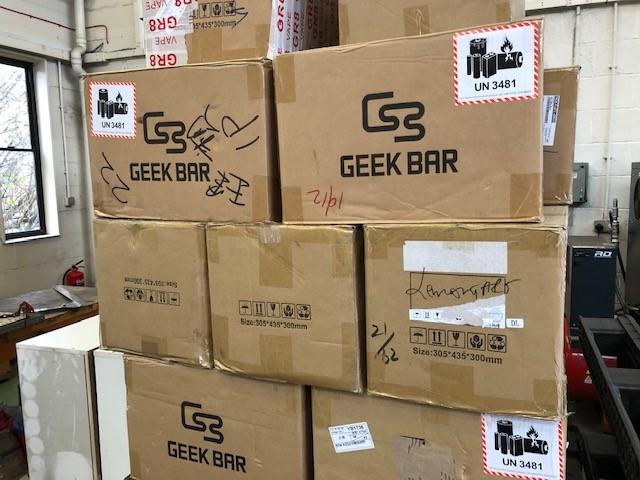 The Elf and Geek Bar Pros which contained higher than permitted amounts of nicotine were being used by schoolchildren.

In the UK it is illegal to sell e-liquids with a nicotine strength of more than 20mg/ml. Most of the haul contained 50mg/ml – more than double the legal limit.

One vape refill is equal to 125 cigarettes and could be toxic if consumed by children.

The massive haul – 2,400 boxes or 24,000 bars - was seized last week from a former takeaway shop in the West End of Newcastle, by Newcastle City Council’s trading standards team.

The investigation followed complaints from some schools in the city that pupils were using the e-cigarettes in school.

Trading Standards has now launched a criminal investigation, and charges could be brought against the owner of the haul.

Cabinet member for Housing and Regulation, Cllr Linda Hobson, said: “These e-cigarettes contain nicotine levels way above the legal limit which means they should not be being sold – particularly to children who might suffer toxic effects.

“We want parents to know what they are so they can warn their kids not to take them.

“I’d like to thank schools for bringing this to our attention and congratulate our Trading Standards team for investigating this, and taking this potentially dangerous haul off our streets.”

Newcastle’s Director of Public Health, Prof Eugene Milne, said: “Although nicotine per se is not the really dangerous part of smoking, and is safe in moderation, it should not be consumed by children and certainly not at these strengths which would only be permitted on prescription.

“While vaping products continue to play an important role in supporting tobacco smokers to switch to a less harmful form of nicotine, we must do all we can to prevent sales to children and to remove from sale products which do not comply with UK regulations.

”The seized goods are being held at a secret location and could be destroyed if a magistrate grants the council a forfeiture order.