Tobacco companies should pay - calls for World No Tobacco Day

Tobacco companies should pay - calls for World No Tobacco Day

NEW figures[i] released for World No Tobacco Day (May 31) show more than 7/10 adults in the North East (73%) support calls for a “polluter pays” charge on tobacco companies to reduce smoking among adults and young people. 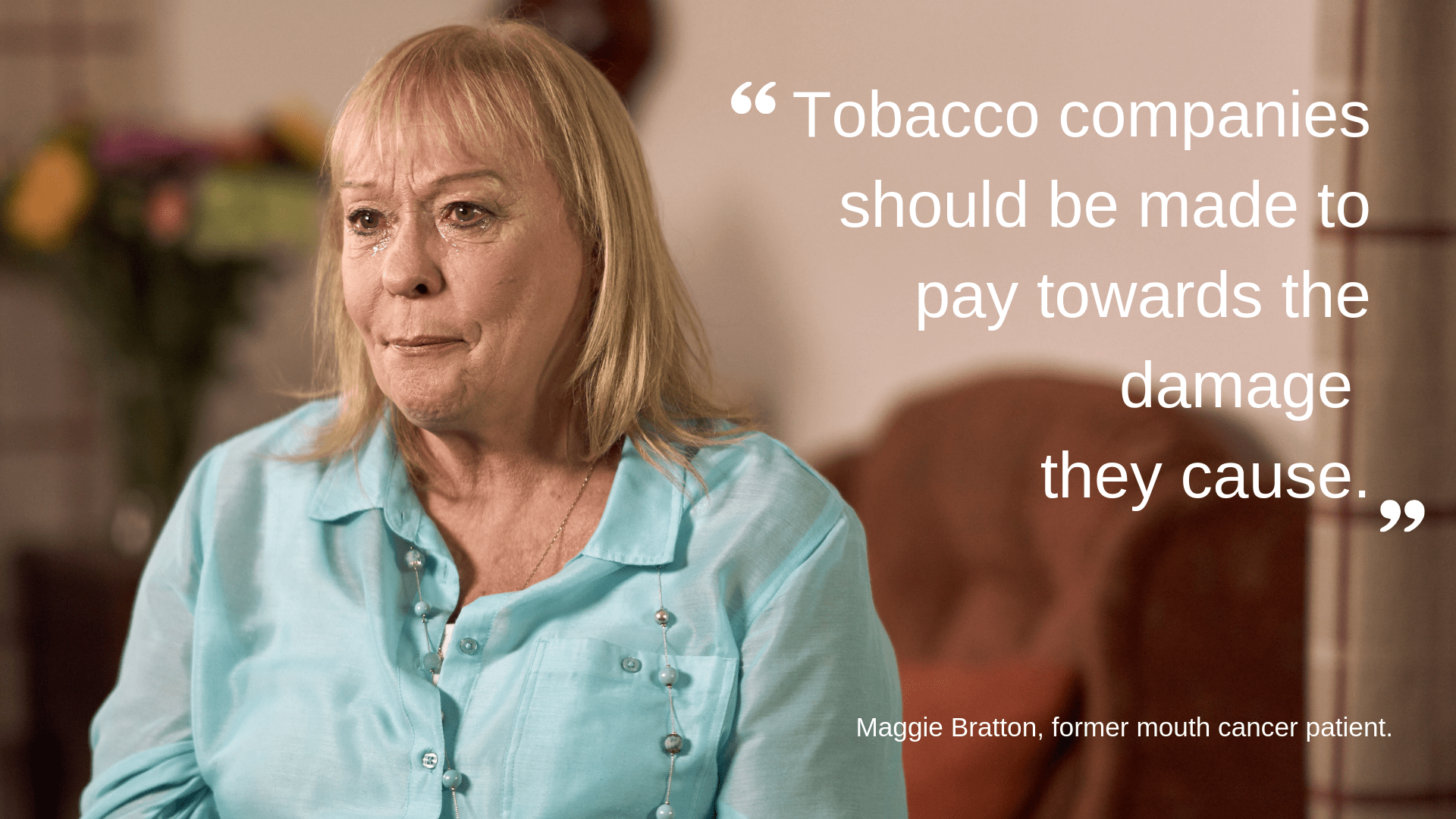 And over three-quarters of North East adults (76%) would support tobacco companies being required to reveal the amount they spend on lobbying politicians, front groups and promoting their products.

The latest North East public opinion figures[i] back up calls from health groups for new measures to reduce smoking and create a “smokefree generation”.  They also comes as tobacco companies have been accused of using social media influencers to promote smoking to millions of young followers worldwide using popular influencers on Facebook and Instagram.

Maggie said: “I started smoking cigarettes when I was about 15.  A lot of people smoked then but the risks of smoking and the sheer number of cancers and diseases which smoking causes were just not as well-known as they are now. I certainly didn’t realise the impact it would have on my life and it makes me angry that the tobacco companies knew so much about the health risks.

“I look back on all the glossy cigarette adverts aimed at women and the lie that you could reduce the risk if you smoked low tar cigarettes and I wonder how many lives all those things cost.

“It is quite honestly appalling that tobacco companies are once again targeting their cigarettes at a whole new generation of young people. These are huge profitable companies with money to burn on advertising and promotion - to me it is only fair that they pay towards the damage they cause.”

In addition the survey by YouGov[ii] shows:

Ailsa Rutter OBE, Director of Fresh, said: “Smoking is our biggest killer with thousands of children continuing to get addicted every year and killing 1 in 2 long term smokers early. Leopards don’t easily change their spots and it is clear that people in the North East believe big tobacco should pay for the deaths, disease and poverty caused by addiction to smoking.

“No other product when used exactly as the manufacturers intend will cause 16 types of cancer, heart disease, stroke, COPD and many other conditions. My own father died at the age of 61 from COPD and every day I think about all he has sadly missed out on. This is why we need bold new measures to tackle the harm caused by smoking.”

“I support these ambitious plans as we work to eliminate smoking in the North East and create a smoke-free generation.

“Smoking has a truly negative impact on an individual’s health, their finances, it can affect their friends, family and people around them. It also has a huge resource impact on our local NHS and social care services.

“Tobacco companies are some of the most profitable in the world and more should be done to restrict their ability to target young people. Using their own insight and knowledge to counter their tactics would give us an edge in the fight against them.

“We have already taken steps across the North East to reduce the number of smokers, however our aim is to eliminate smoking and so there is more to do.”

Prof Eugene Milne, Director of Public Health for Newcastle City Council and lead North East DPH for Tobacco, called for a levy on tobacco companies and said: “You would be hard pressed to find any family in the North East that hasn’t been affected by smoking. Around 5,500 people die in our region from smoking each year which is around 55,000 people over the last decade - more than the capacity of St James Park.

“We have paid heavily for the millions spent on marketing and advertising of cigarettes over several decades.  Making tobacco companies in the UK pay towards the costs of reducing smoking rates is wholly justified.

“Smoking costs the North East at least £613 million a year but who can put a price on the years of health and happiness lost to smokers and their families? At the same time the four largest tobacco companies in the UK will make around £1.5 billion in profit[iii].”

He added: “The North East has made significant progress in reducing smoking over the last decade but if we are to achieve our ambition of a smokefree generation we need further measures. “

Did you know? The tobacco industry

The All Party Parliamentary Group (APPG) on Smoking and Health has called for a package of measures backed by cross-party support on the APPG in its new report “Delivering the vision of a Smokefree Generation”. These include:

[i] All figures, unless otherwise stated, are from YouGov Plc.  Total sample size was 12,393 adults, of which 516 were in the North East. Fieldwork was undertaken between 12th February and 10th March 2019.  The survey was carried out online. The figures have been weighted and are representative of all GB adults (aged 18+).

[ii] All figures, unless otherwise stated, are from YouGov Plc.  Total sample size was 12,393 adults, of which 516 were in the North East. Fieldwork was undertaken between 12th February and 10th March 2019.  The survey was carried out online. The figures have been weighted and are representative of all GB adults (aged 18+