Excitement building in Newcastle ahead of the Queen’s Platinum Jubilee

Patriotic fever is sweeping Newcastle as the city gears up to celebrate the Queen’s Platinum Jubilee. 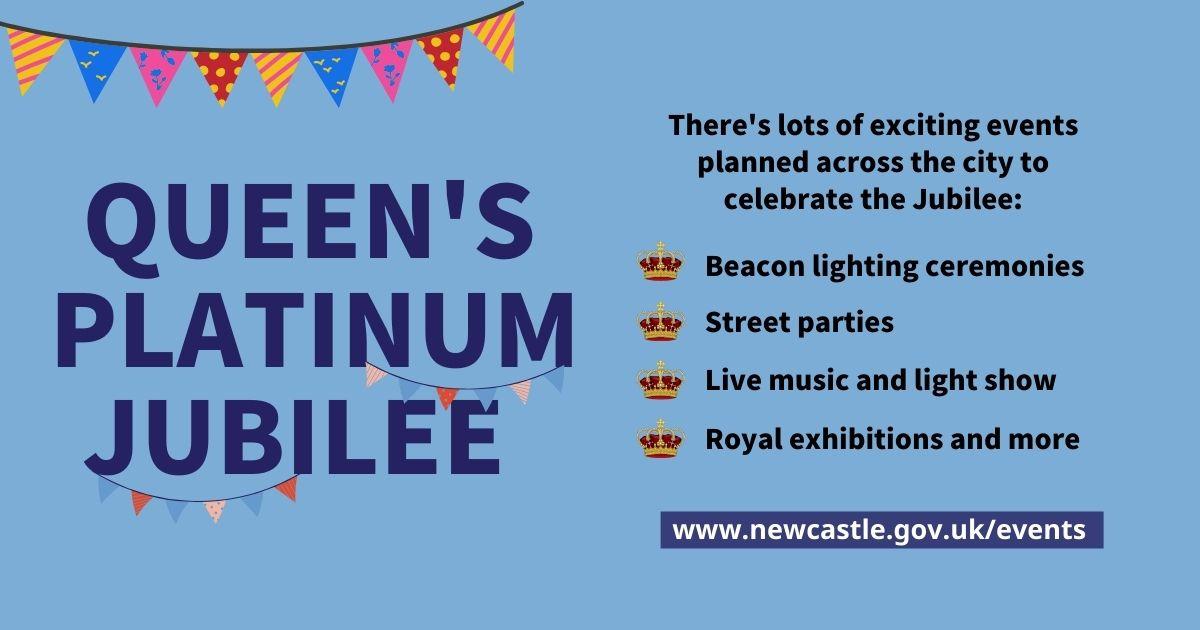 From street parties to musical performances, a jam-packed programme of events will take place across the city to mark Her Majesty’s 70 years on the throne.

The bulk of the Jubilee events will be staged over the four-day bank holiday weekend from Thursday, June 2 to Sunday, June 5.

Cllr Nick Kemp, leader elect of Newcastle City Council, said: “This is a historic moment for our country and we are thrilled so many people in Newcastle will come together to celebrate the Queen’s Platinum Jubilee.

“We have had a fantastic response from our communities and the bank holiday weekend looks set to be a truly amazing four days, whether you’re attending one of the many organised events, joining neighbours for a street party or celebrating with friends and family at home.”

Families are invited to gather for picnics in the grounds of St Thomas’ Church on June 2 from 6pm ahead of a spectacular night of entertainment at Newcastle Civic Centre’s Ceremonial Way hosted by BBC Radio Newcastle presenter Alfie Joey.

Starting at 7.15pm, there will by performances from the Shoeshop Quartet, musician Chris Cowan, the Northern Monkey Brass Band, street theatre show Spark, a piper and bugler.

More than 1,500 beacons will be lit across the UK and the Commonwealth in the evening, building on the long tradition of lighting beacons to mark major royal events.

A beacon-lighting ceremony will take place at the Civic Centre at 10pm and it will be lit alongside scores of others along the route of Hadrian’s Wall to celebrate its 1900th anniversary.

Local choir Sing United will also sing a song for the Commonwealth called A Life Lived with Grace.

In the West of the city, Urban Green Newcastle will be holding an evening of family fun events at Hodgkin Park in Benwell between 8pm and 10pm.

Carnival workshops and performances from Hannabiell Sanders, community stalls, street food from the Newcastle Foodbank working with the Dialogue Society and Beelines NE craft activities will be among the entertainment before the lighting of the park’s beacon at 9.45pm.

In the East, the Ouseburn Trust has teamed up with the Cumberland Arms to hold a Hadrian's Wall Beacon Party from 4pm to 11pm.

A storytelling event will take place at the newly refurbished story circle by the pub, while there will be live music on the terrace and food from a local vendor.

Revellers will also be able to enjoy an exclusive Roman beer brewed by Northern Alchemy, performances by the Kingsmen and a light and music show before the lighting of the beacon at 10pm.

As part of the wider Jubilee celebrations across the city, houses, pubs and businesses will be decked out with flags and bunting.

Landmarks including the Civic Centre and the Tyne Bridge will be illuminated red, white and blue.

And communities will be decorating their streets in bunting and dusting off the trestle tables as they come together to hold street parties.

Meanwhile, Newcastle City Library will be hosting a variety of Royal exhibitions throughout May and June, with smaller displays going on show at other branches.

Each branch will also have Jubilee-themed story times and craft activities for young people.