What's on this page:

The council and its partners are delivering on a long-term vision to transform Newcastle City Centre. Through a series of interventions on some of the major thoroughfares and some of the quieter streets at the heart of our city centre, we will be making our city a more welcoming and attractive place for everyone. The City Centre Transformation Programme (CCTP) will deliver a cleaner, greener heart of the city that will benefit its people for generations to come. We will create a unique European destination for tourism, business and investment that people can continue to be proud of, attracting further investment and allowing Newcastle to continue to grow for its communities.

A key part of achieving the vision for the transformation of the city centre is addressing the way in which we use our streets, including plans to remove vehicle traffic from some areas of the city. The proposed changes to the transport network are critical to enabling the wider programme and we are now in a position to share the detail of these changes, and collect formal feedback and comments on the plans.

We are proposing to remove the vast majority of vehicular traffic from Blackett Street, New Bridge Street West and the northern section of Pilgrim Street.

This includes rerouting buses and in some instances amending delivery times and the location of loading bays. This would allow the focus of these central streets to be on people and other uses, not on vehicles.

At present, these central streets are not as welcoming as they could be. There is limited space for people to use and enjoy their surroundings, and we feel these changes would enable businesses to use the space differently.

We have a vision to transform this area into a green gateway into the city, connecting surrounding streets with spaces to stop and socialise. We want to see more emphasis on biodiversity and greenery, with trees, planting, public spaces and artwork much more prominent.

To realise this vision, we feel we need to remove motor vehicles. This would be done through a legal process called a Traffic Regulation Order (TRO) which we consulted on in September and October 2021.

Before the pandemic, we spoke to local businesses about changing vehicle access on Blackett Street, to aid pedestrianisation of parts of the city centre. This is fundamental to delivering our vision for the city, opening up space for people and improving our environment. We have taken on board the feedback and used it to shape the proposed changes to the transport network that will enable us to achieve our vision.

A TRO – or Traffic Regulation Order – is a legal act that restricts or prohibits certain uses of the highway network and are implemented in cities to re-allocate traffic. A TRO is a formal legal process, and an order is published before highways changes are implemented. Once the order is published, a period of statutory consultation begins ahead of a decision being made.

This consultation process has now ended. This is an opportunity for everybody to have their say on our proposals. When the consultation period has ended, all of the feedback received will be analysed and changes to the proposals made where possible, before final decision as to whether or not to make these changes.

A plan of all of the changes proposed for the city centre is available here. The details of each of the proposals are outlined below, divided into three main categories: 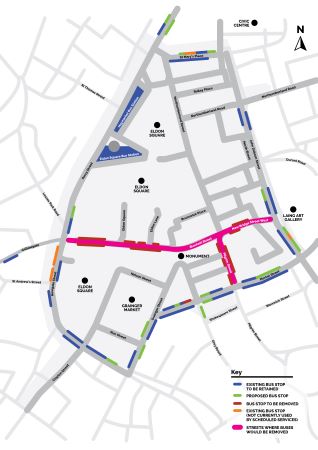 Blackett Street, New Bridge Street West and Pilgrim Street would be closed to buses. This map details proposed changes to the bus stops.

Proposed changes to bus operations include:

Relocation of buses from Blackett Street, the northern section of Pilgrim Street and New Bridge Street West onto surrounding roads. This would effectively create a ‘bus loop’ around the core of the city centre. This central area would then be focused on people, with limited access for vehicles. The surrounding roads would then include:

New and/or improved stops would be provided in the following locations:

Shelters and seating would be provided as far as possible in new / improved stop locations.

We are not able to confirm at this time where individual services would be relocated to, as this is not a decision for the council.

We have prepared a potential reallocation of stops and can provide information about where different buses could stop. If this is something you would like access to, please contact us.

Exemptions would be in place for emergency vehicles at all times. 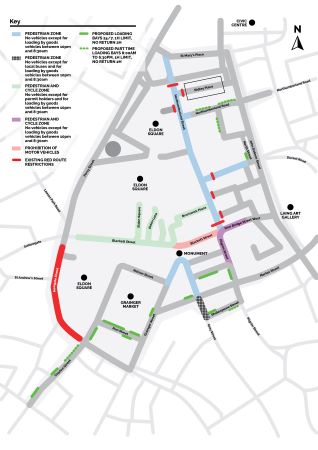 Proposed changes to loading restrictions would include both changes to locations of loading bays and to delivery times in various places.

Exemptions would be in place for emergency vehicles at all times. 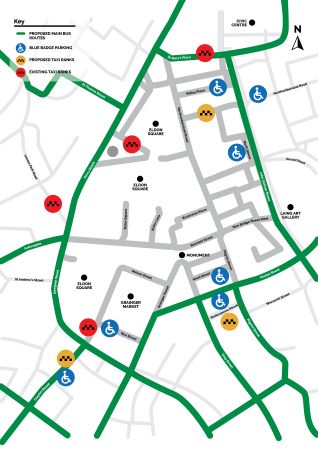 Proposals for parking in the city centre include:

Have your say on the proposals

The consultation has now ended.

Listen and download audio versions of our newsletter and cabinet report. 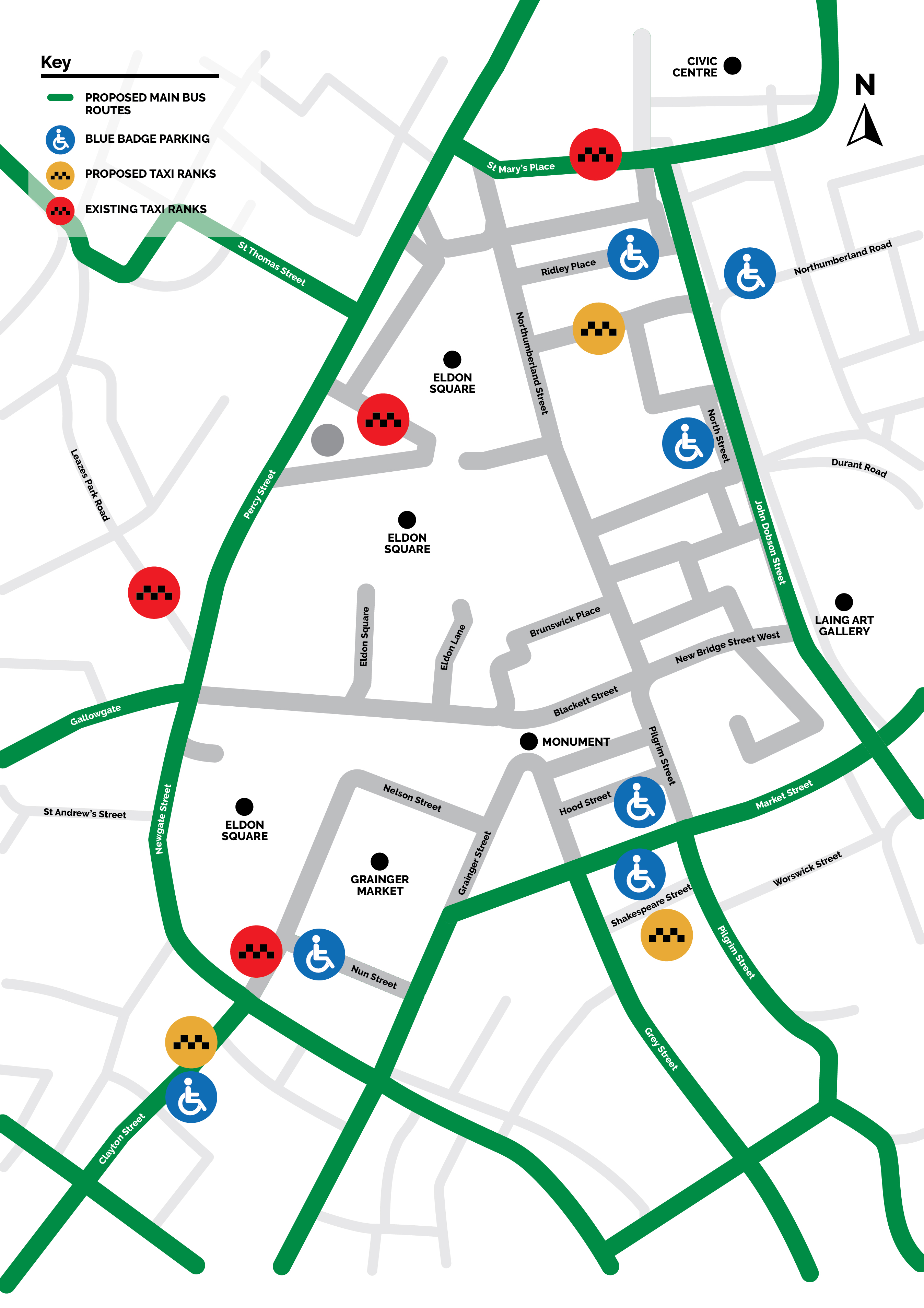 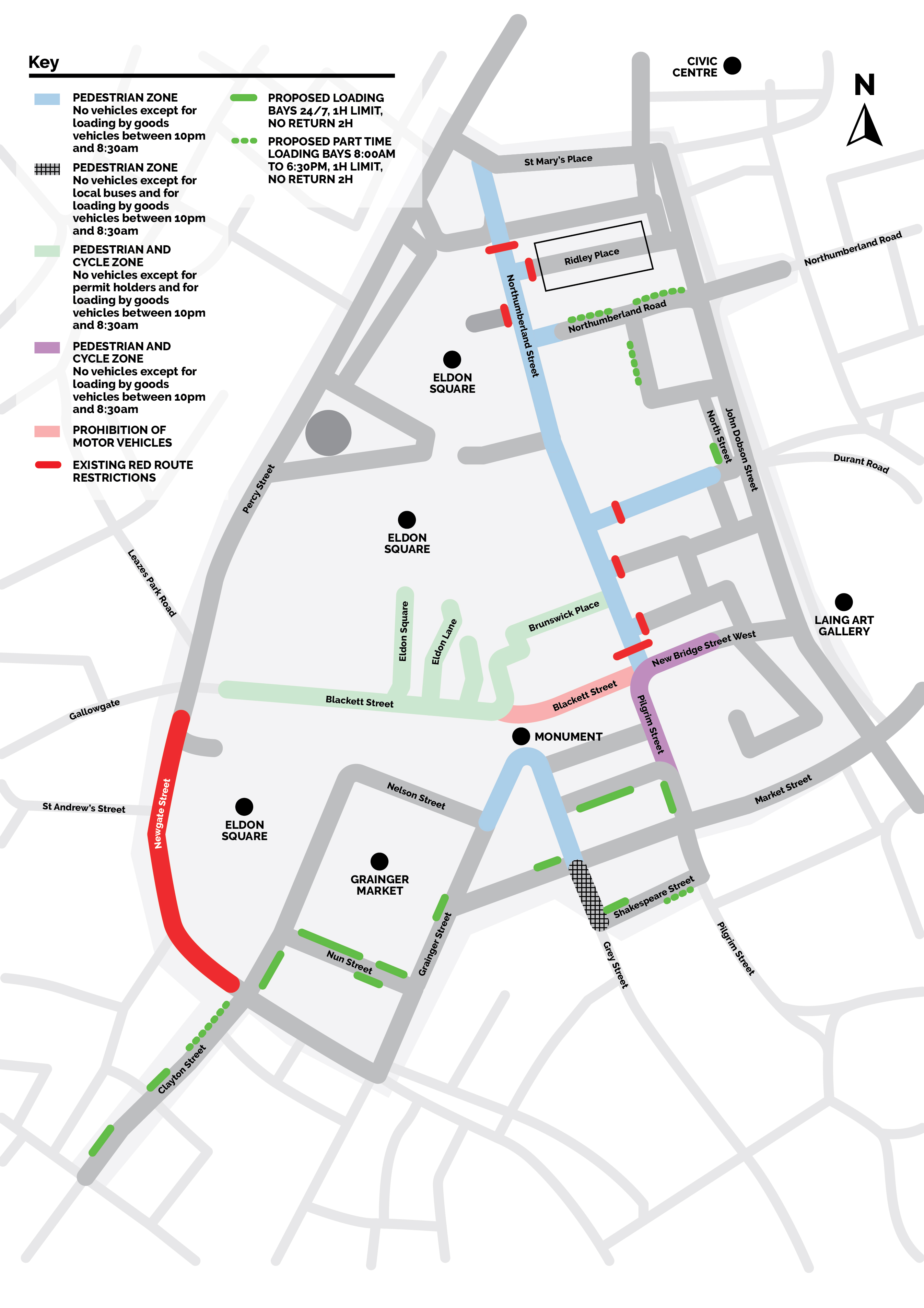 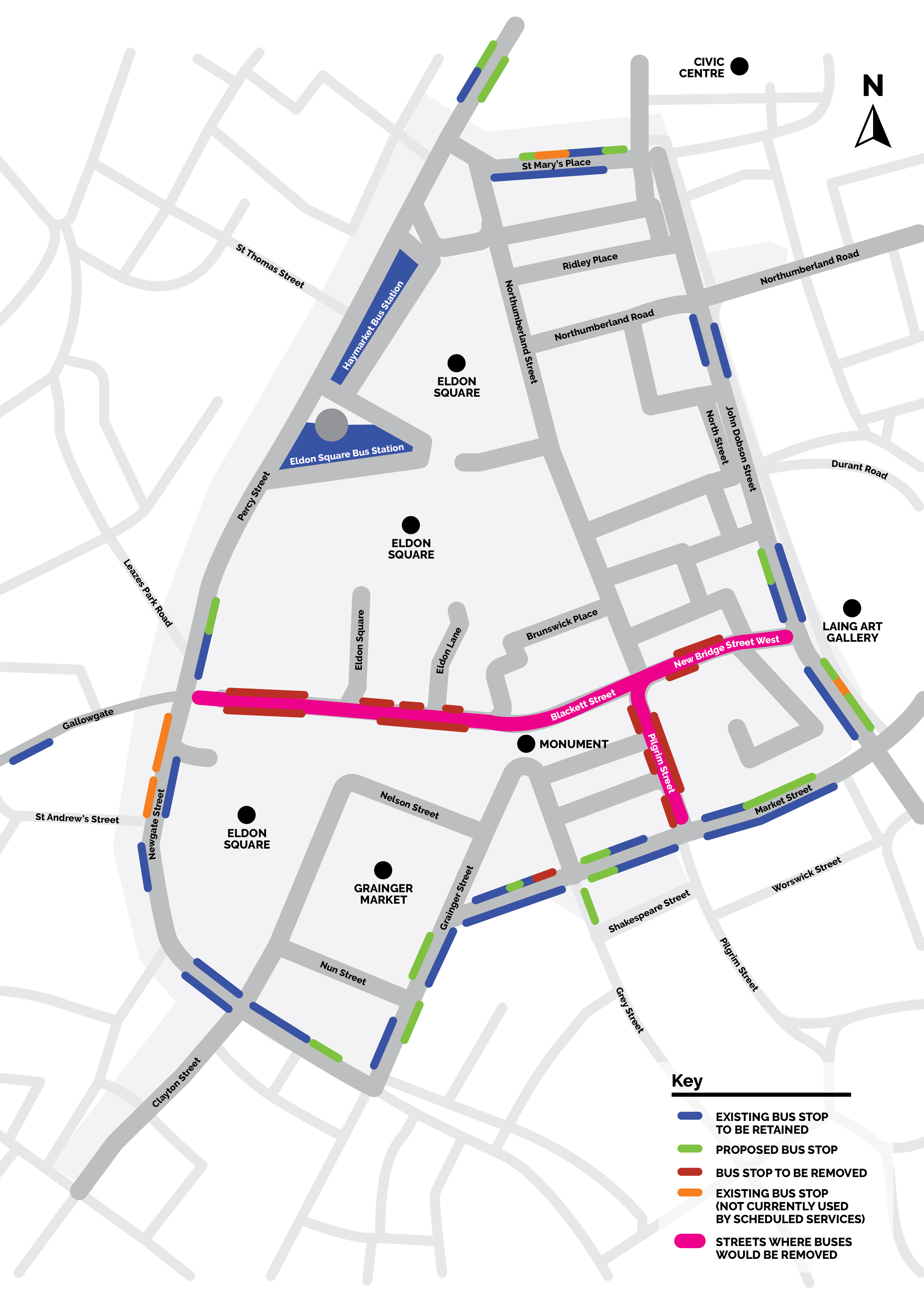 You can find out more on our vision for the city centre pages.

Pages in this area