Safer, cleaner and greener neighbourhood scheme to launch in Gosforth

Measures to reduce traffic cutting through some local streets in South Gosforth are set to be introduced in the coming weeks. 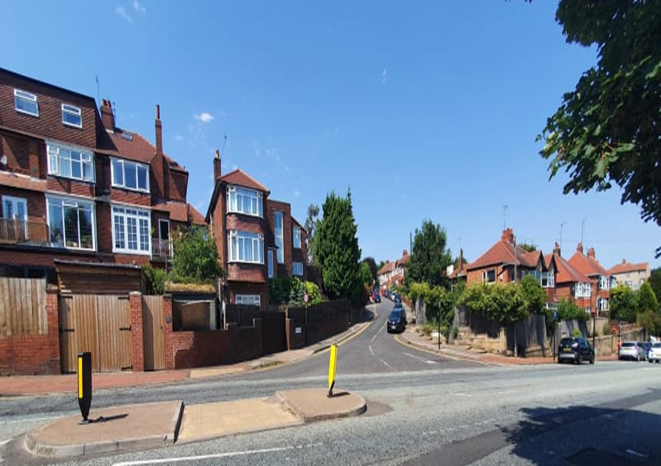 Beatty Avenue at the junction with Matthew Bank will be closed to through traffic.

From next month, residents living in the Five Admirals Estate near to a major commuter route, will see measures installed to restrict traffic cutting through their estate as well as junction improvements to create safer, cleaner and greener neighbourhoods in South Gosforth.

Changes include closing Beatty Avenue to through traffic where it meets Matthew Bank, and improving junctions for residents accessing Sturdee Gardens and Beatty Avenue from Jesmond Dene Road (A189).

Legal orders are being progressed to restrict through traffic as part of another trial to reduce traffic in local neighbourhoods, which will be in place from 6 February. This follows on from similar schemes which were implemented in Fenham and Heaton.

The proposals were developed over the summer, following feedback from residents as well as a drop-in event in the area and discussions with local councillors to finalise the scheme.

Cllr Jane Byrne, cabinet member for a connected, clean city said: ”The changes in Gosforth are designed to prevent traffic cutting through residential streets rather than sticking to more appropriate routes. This will certainly benefit the children going to and from school at South Gosforth First School, making it much safer and easier to walk and wheel on the school run.

“The final scheme has been developed based on residents’ feedback, which we will install from next month. We know many residents were keen to see this scheme going forward to reduce traffic cutting through their local streets, making the area much safer and more attractive for the people who live there. It will also encourage more people to walk and cycle on local journeys, which has a big impact on people’s health and wellbeing, improves air quality, as well as greatly improving safety for children getting around their local area.

“As with similar schemes, trials mean we can make changes if needed, and people can leave us their feedback on whether or not they think the changes should be made permanent.

“There has been a lot of support to reducing through traffic on residential streets, so we are drawing up more plans to create safer, cleaner and greener neighbourhoods across the city.”

Using an Experimental Traffic Regulation Order (ETRO), the council will trial the closure of Beatty Avenue to motor vehicles as well as improve safety at two junctions off Jesmond Dene Road.

Under the ETRO process, this scheme can remain in place for up to 12  months, with public consultation running for the first six months of the scheme being implemented. The consultation will run from 6 February until 13 August 2023, which will be used alongside data collected, to determine whether the changes should be made permanent.

Leaflets setting out the changes and information on the public consultation are being delivered to residents living in the area, ahead of the scheme being implemented.